Deprecated: mysql_connect(): The mysql extension is deprecated and will be removed in the future: use mysqli or PDO instead in /home/hustletopia/public_html/wp-includes/wp-db.php on line 1665
 6 Ways to Avoid Scams When Selling Your Stuff Online – Hustletopia Skip to the content

These days, selling items you no longer want or things you’ve made has become easier and more lucrative than ever before. We no longer have to hold yard sales every week, or pay for classified ads in newspapers.

With eBay, Amazon, Etsy, Craigslist, and so many other outlets available, you have the world at your fingertips. But of course, the more open you are to sellers, the more accessible you are to scammers.

Know what to watch out for, and you can sell your stuff with minimal stress. (See also: How to Protect Elderly Loved Ones From Financial Scams)

If you’re selling on Craigslist, you have to be very careful with cash transactions. Something scammers love to do is present a fake $50 or $100 bill, and take home an item along with a bunch of change. The seller is left holding a worthless note and down a valuable possession. One way to keep this kind of damage to a minimum is to only take $20 bills and below.

However, $20 bills can be fake as well, so you have to keep your wits about you. There are many ways to detect fake notes, and if the bill has blurry text and lines, no watermark, you likely have a fake. If you’re in no mood to become a detective, pick up a fake note detector kit.

It costs less than $10 and will pay for itself the first time you detect a phony bill.

2. Always Meet Your Buyer in a Public Place

It may be inconvenient for you to meet in a police station parking lot or at a local coffee shop, but your first priority here has to be your personal safety. You have no idea who you’re meeting and what they have in mind, even if they sound wonderful via email or over the phone.

Some “buyers” lure you in to steal your item, and whatever else you have on you. Some want to cause you physical harm, or worse, and have no intention of purchasing anything. If you ask to meet in a public place and they refuse, that’s a massive red flag.

If they want you to bring the item to an address of their choosing, you also need to steer clear of that transaction.

If you can, bring a friend (or friends) and tell other people where you’re going and all the details about the person you’re meeting. Most of the time, it’s just a regular person looking for a deal. But you really don’t want to let your guard down and trust the wrong person.

3. Have Evidence of the Item’s Condition

Many people abuse the goodwill of online sellers to save money. One of the nastiest ways you can be taken advantage of is when someone buys a mint condition item from you, then asks for a return and a refund because “it doesn’t work.”

For example, let’s say someone buys a high-end computer mouse from you, then they say it doesn’t work and want a refund. You know it worked fine when you sold it. If it’s something that costs more than just a few bucks, have evidence of the item working in the listing itself.

Take accurate photos and videos, and record serial numbers. It takes just a few minutes to get this all down, and you only have to store it until the transaction is closed and everyone is happy.

This is not to say that all buyers with new accounts are scammers. This is simply a precaution you should take to avoid getting stung. Scammers tend to get banned by eBay after a few incidents that form a pattern of fraudulent behavior.

These people will just keep opening new accounts, doing a few returns for broken items, or “item not as described” before being banned again and continuing the cycle. Luckily, you don’t have to weed these buyers out on your own. eBay has settings that let you block certain buyers.

5. Be Wary of Requests For Partial Refunds

So, you sold your item and everything seems fine. Then you get an email from the buyer, saying that the item isn’t in the condition they were expecting, or it’s missing some parts — which you know were included. But they want to keep the item.

They’d just like you to refund their money to make things right. If you’re asked to do a partial refund, try and get evidence of the problem. If it’s damaged, ask to see the damage. If it doesn’t work as described, ask for a video. If they refuse, you know something’s afoot.

If they do send pictures, you have a few choices. You can say you want the item to be returned, and will fully refund their purchase upon receipt. If they don’t want to do that, they’re probably trying to get a quick buck from you.

Of course, sometimes these partial refund requests are genuine, perhaps due to an inaccurate listing from a new seller, or another mistake. In that case, a partial refund is something you can issue if you feel comfortable.

6. Never Ship to a Different Address Than The One on File

When you set up an account on an online selling site, you should enter a shipping and billing address. This is standard practice. If you sell an item, and receive a note asking that you ship to a different address, you should decline.

On rare occasions, the person hasn’t updated their shipping address from a move, or it’s a gift for someone else. Too bad. Don’t do it.

When you’re asked to ship to a different address, it could be that the account in question has been hacked, or you will be asked for a refund because the item was not delivered to the address on file. It’s just not worth it. 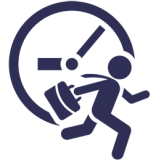 Hustletopia is dedicated to making your life a little bit easier through the value of its content by sharing unique job opportunities, side hustles, money-saving strategies and so much more.

Please Note: material connections may not be made known at every single advertisement or affiliate link. You should assume that a material connection exists and that we may receive compensation in money or otherwise for anything you purchase as a result of visiting this website and also that we may be paid merely by you clicking any link.